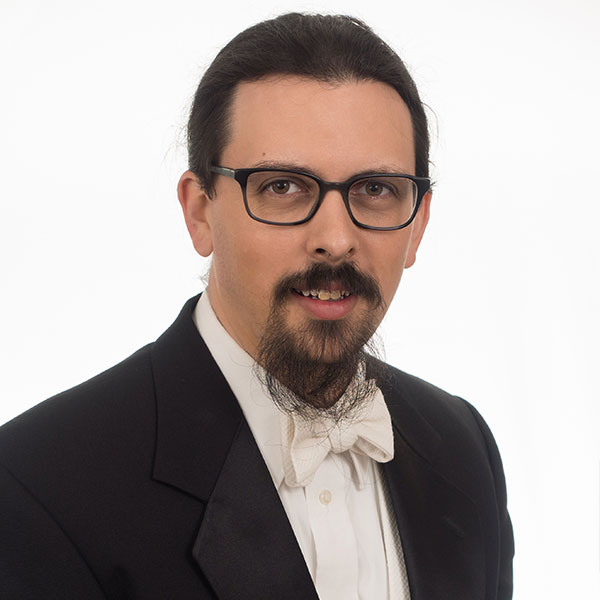 Instrument: When asked about his role as Orchestra Librarian, Justin said, "To put it succinctly, as a performance librarian, it is my responsibility to see that the correct music is in the correct place, at the correct time. This means verifying editions, orchestrations, and versions of each piece, acquiring the music and securing the necessary copyright permissions, and implementing any necessary markings, edits, or cuts in the parts as requested by the conductor and principal string players; transposing music as required by transposing instruments. The most visible part of my job to the audience is putting the music on the stand for each rehearsal and performance and taking out the conductor's score at each performance. I also manage the collection of chamber and orchestral music for the Sarasota Orchestra."

Education:
While pursuing a BM degree in Trombone Performance at Union College (Lincoln, NE) and the University of Nebraska, Lincoln, Justin became interested in a career as a performance librarian.  Primary performance library teachers and mentors include Tim Howe (formerly Omaha Symphony), Peter Conover, Carole Keller, and Mark Swanson of the Chicago Symphony, Robert Sutherland of the Metropolitan Opera and Robert O'Brien of the Cleveland Orchestra.

Passions/Interests:
Justin loves being in the Rocky Mountains, in particular backpacking, hiking, and mountain biking.  Justin is passionate about non-profit leadership and governance and has served on several boards and non-profit committees both locally and regionally.  When he can find the time, Justin also enjoys amateur birding with his wife.

Career Highlights:
As a member of the Sarasota Orchestra and their collaborations with the Sarasota Ballet, Justin has been instrumental in updating and improving ballet materials for numerous performances, most notably several American Premieres and Florida Premieres of Ashton ballets.

In a changing performing arts world where music publishing equally excites and disappoints, Justin has digitally remastered, and in some cases edited, scores and parts to several works. These include Tchaikovky's first symphony and Richard Strauss' Also Sprach Zarathustra and as of 2019 is working on a new edition for Elgar's In the South Overture.

Justin has been a member of the Major Orchestra Librarians Association (MOLA), the professional organization for performance librarians since 2000, has served on the MOLA Publications Committee for many years, and has presented at several annual conferences.