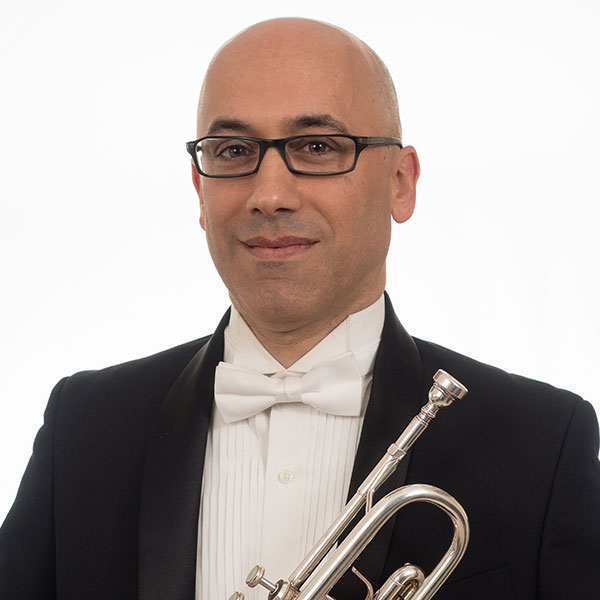 Biography:
Stephen Madancy completed his musical studies at the University of Michigan, where he studied with the renowned trumpeter Armando Ghitalla. After graduating from Michigan, he joined the trumpet section of the Charleston Symphony Orchestra in South Carolina. In 1998, after a worldwide, three-month audition tour, he was selected from a pool of over 3000 applicants to become Principal Trumpet in the newly-forming Malaysian Philharmonic Orchestra in Kuala Lumpur, Malaysia, where he was also a featured soloist. He returned to the United States to accept a position in The Sarasota Orchestra, where he has remained as a member of the trumpet section.

In addition to his responsibilities in Sarasota, Steve is an active freelance musician in the New York City area, performing with numerous ensembles including the Metropolitan Opera, The Knights chamber orchestra, the Oratorio Society of New York, Musica Sacra, the Hartford Symphony, the Westchester Philharmonic, and the Orchestra of St. Ignatius Loyola. He is also Co-Principal Trumpet of the Utah Festival Opera Company in Logan, Utah, where he has performed during the summers since 2001.

He has studied privately with James Pandolfi, James Thompson, Chris Gekker, and Arnold Jacobs, and has taught on the faculty of the University of Evansville, and has maintained private teaching studios in New York City, Florida, South Carolina, Indiana, and Michigan.

Passions/Interests:
Steve has an abiding love for the natural world; he loves hiking and camping in the mountains, particularly those in the western U.S., and is also an avid photographer. He is keenly interested in learning about different cultures around the world, and spends perhaps a bit too much time watching nature documentaries. He's visited 49 states (Alaska remains elusive), and three continents, and still hopes to find the opportunity to visit the remaining four.