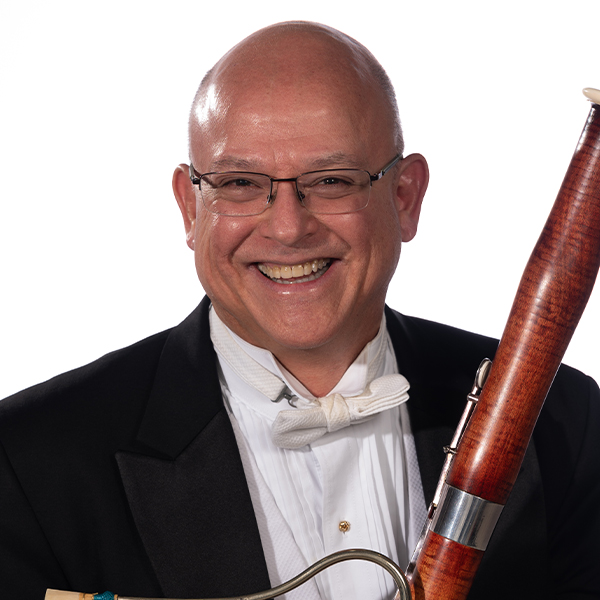 Instrument: Fernando's bassoon was made by the Heckel Company (based in Wiesbaden, Germany) in 1923. They have been making bassoons for almost 200 years and are considered the "Stradivarius" of the Bassoon world. Bassoon's (and contrabassoons) have 23 keys; Because of this, they are woodwind instruments that require all ten fingers to operate, unlike the flute, oboe, and clarinet. Fernando's bassoon is made out of Maple wood. After the wood is cut from the tree, it has to wait over ten years before it can be used to make a bassoon.

Education:
Bachelor of Music and Master of Music – Cleveland Institute of Music; Artist Diploma – The Juilliard School of Music

In 1992, Fernando moved to Sarasota and met the late Charles Robert Reinert (former Bassoon professor at SUNY Potsdam). He became Fernando's best friend, musical "Coach", and the best man at Fernando's wedding in 1998. The two talked bassoon, music and life until his passing in 2007 at the young age of 94.

Biography:
Fernando Traba has served as Principal Bassoon with all five major orchestras in Mexico City, as well as the Orchestra of the Principality of Asturias (Spain), National Opera Orchestra, (Portugal) and Orquesta Sinfónica de Minería (Mexico). He has performed the major bassoon concertos with orchestras in Mexico, Europe, and the United States, including multiple performances with the Sarasota Orchestra. Most recently he was heard in three performances of R. Strauss's Duet-Concertino with clarinetist Bharat Chandra and the Sarasota Orchestra (February 2019).

An avid chamber musician, Mr. Traba has been a member of the Sarasota Wind Quintet since 1992, and has also performed with Instrumenta (Mexico), the Palm Beach, and ChamberFest Cleveland Music Festivals. Mr. Traba has a private bassoon studio, serves on the faculties of Florida Southern College (Lakeland) as well as State College of Florida (Bradenton), and has edited and translated into Spanish the second edition of Christopher Weait's Bassoon Reed Making: A Basic Technique.

Career Highlights:
Some of Fernando's proudest musical accomplishments include: