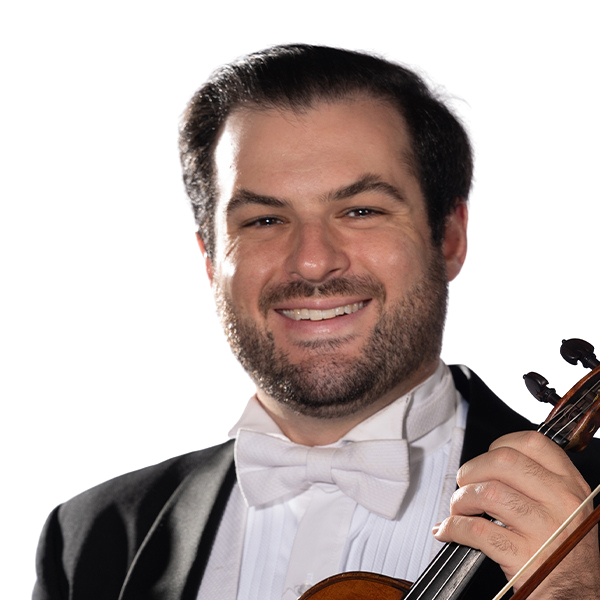 Instrument: Michael plays on a violin made by Enrico Marchetti in Cuorgnè in 1895, which Michael acquired in 2016.

Biography:
Born in Los Angeles, Michael Turkell leads a diverse and passionate musical life as a soloist, chamber musician, and mentor in addition to orchestral playing. Michael studied under Alexander Barantschik, concertmaster of the San Francisco Symphony, and Martin Chalifour, concertmaster of the Los Angeles Philharmonic, while attending the San Francisco Conservatory of Music, where he received his bachelor's degree in 2015. He received his master's degree at The Cleveland Institute of Music, where he studied with Joan Kwuon. More recently, he just finished his four-year fellowship at the New World Symphony in Miami Beach.

Michael has performed with the San Diego Symphony, Pacific Symphony, Britt Festival Orchestra, Artosphere Festival Orchestra, Canton Symphony, and Erie Philharmonic Orchestras. Since 2017, he has been a part of Lincoln Center Stage, performing with a piano quintet on cruise ships all around the South Pacific, Pacific Northwest, and the Caribbean.

In the winter of 2000 Margot won a full-time violin position with the Sarasota Orchestra in Florida, where she is currently serving as a core violinist. She has also served as a Concertmaster and Soloist with the Charlotte Symphony in Port Charlotte, Florida where she played a leading role on stage. She has also performed with the Florida Orchestra in Tampa, Florida, the Naples Philharmonic in Naples, Florida, the Orlando Philharmonic in Orlando, Florida and the Florida South West Symphony in Fort Meyers, Florida. Margot also serves as the assistant Concertmaster and The Principal Violinist of the Strauss Vienna Orchestras of America. She has also served as the Principal violinist of the Midsummer Mozart Festival Orchestra in San Francisco, California.

Passions/Interests:
Michael tells us: "I'm passionate about biking, and I can't wait to bike the entire Legacy Trail. I also love going hiking, and I one day hope to hike the cables on Half Dome in Yosemite NPS I also hope to one day visit every single park in the US National Park System.

"I'm also a huge pizza fan--I once spent 18 days in New York City, and every single day I was there, I tried a new pizza place...some days, I had pizza for lunch and dinner (mercifully, never breakfast).

"Since the summer of 2020, I've been very involved with committees, projects, and causes geared toward making our art form more accessible, equitable, inclusive, and reflective of our ever-changing society, and I'm looking forward to continuing that work here in any way that I can help."

Career Highlights:
At the New World Symphony: Being concertmaster for Rimsky-Korsakov's Scheherazade with Marin Alsop on the podium in December 2021; being concertmaster for Michael Tilson Thomas' final concert as Artistic Director of NWS, performing Mahler's Fifth Symphony; going on tour with NWS to perform two different concerts at Carnegie Hall, Michael's first time at the legendary venue.

Chamber music: Performing string sextets with some of his closest friends in Chicago and Miami Beach in 2021; performing piano quintets on Holland America Line cruise ships from 2017-2019, including recording Brahms' Piano Quintet in Juneau, AK, in August of 2018; performing Ravel's Sonata for Violin and Cello with a dear friend, Victor Minke Huls; performing sonatas with another dear friend, Maria Parrini.

Michael adds, "Performing Mahler 1 at the Berlin Philharmonie with the San Francisco Symphony Youth Orchestra in 2012 was a hugely inspiring moment for me and everyone else in the group."

Literally gripping the arms of my seat, I was not the only one propelled on this rollercoaster of delightful music.

The Sarasota Orchestra was brimming with bubbling energy...

A lifetime of musical moments, cinematic in scope, gave every section of the orchestra a leading role at one time or another. Chief among them was the virtuosic solo of concertmaster Daniel Jordan.

It was a thrill ride resulting in an explosion of audience enthusiasm.

The Sarasota Orchestra played a program this past weekend filled with so much color, it was like visiting the Louvre.

The Sarasota Orchestra returned to its strongest suit, the Masterworks Series, with a concert that allowed every facet of its jewel to sparkle.