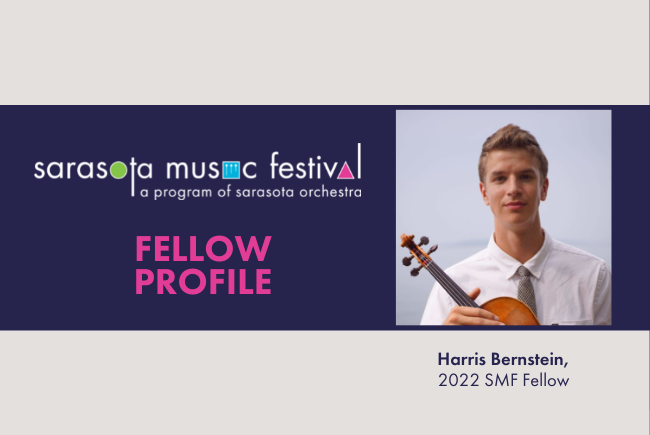 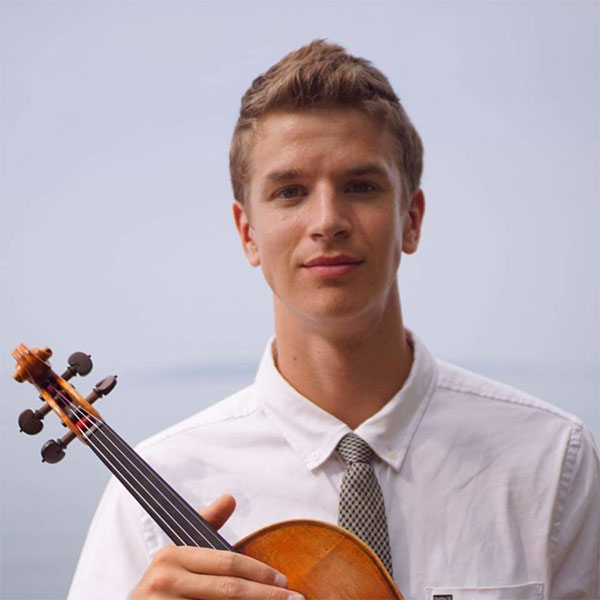 Violist Harris Bernstein is a recent graduate of the Yale University School of Music, where he received his Masters in viola performance. Prior to that, he completed his undergraduate studies at McGill University in Montreal, Canada.

Growing up in Minneapolis, Harris had the opportunity to participate in several youth educational programs, including the Minnesota Youth Symphony and the Artaria Chamber Music School. As a musician, his mindset tends to be one of growth and curiosity, something he attributes to his professor at Yale, Ettore Causa. Harris often finds himself inspired by interactions with mentors and peers. Opportunities to play with professional musicians, such as the SMF Faculty, are special to him. He states, “It just opens up your mind to new concepts and new ideas and raises your level.”

The opportunity to work with great musicians played a large role in bringing Harris to Sarasota. And so far, he’s been extremely pleased with his experience at SMF. “I’m really blown out of the water by the level of playing here. It’s awesome to be around great players and great teachers.” As it turns out, there is a general attitude of camaraderie to be found here as well - a pleasant surprise to Harris. “Oftentimes in music, especially at the higher level, it gets a little competitive. I don’t feel that here. Everybody’s just doing their thing together and working hard together. It’s really great to see that,” he shares emphatically.

Harris is especially thrilled about the musicians in his quartet, which, according to him, is composed of fantastic musicians and people. “We play really well together. That’s not always the case.”

Like many of his peers here at SMF, Harris had been admitted to and was planning on attending the 2020 festival, which was cancelled as a result of COVID-19. When asked how it feels to finally be back in-person with other musicians, Harris smiles. “It’s been a while since I’ve done a festival. Definitely was a little daunting at first, but it’s day three and you can tell that everybody’s warmed up to each other and getting along just fine.” His sentiment echoes a gratitude often expressed within our halls – that despite everything, live music continues to bring people together.

As for what’s next? Harris lights up as he describes his newest project, a chamber music series he and two other Yale musicians are starting in the fall back in Minneapolis. The aim, as Harris describes it, is “to provide bite-sized and accessible programs for anyone that includes both masterworks and new music.” A lot of society is under the impression that learning an instrument is a daunting endeavor that can only be undertaken by those with musical talent. But Harris is a staunch believer that music is for everyone.

“There’s no such thing as somebody that can’t make music,” he says. “Music is really innate in all of us. We all can do something and we all need to do something in order to feel fulfilled as human beings, and if we’re not, we’re suppressing something. Whether you’re hitting something together or singing or whatever, music is important to all of us in terms of being balanced human beings. I truly believe that.”